Hi! Today I am going to leave you here the recipe to prepare some Cinnamon Rolls or Cinnamon Rolls. The recipe is very simple, they are very tasty and my family who are my best critics loved it 🙂 They said they taste the same as those of the cinnabon chain. As always I leave them step by step in photos and videos so that they can do them at home. I recommend it! 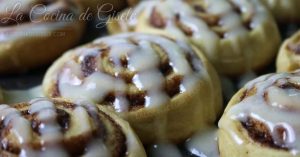 Watch the Detailed Video of the preparation here below

First we will add the yeast in a bowl and then we will add the warm water and the teaspoon of sugar. We stir a little to dissolve it and we will let it rest for approximately 10 minutes until it ferments. As you can see in the video above, the yeast grew quite a bit. After this step, we will add the rest of the ingredients: The milk cream, the egg, the melted butter, the sugar, the salt, the vanilla and finally the 3 cups of flour.

We will knead for 6 minutes. The dough should be elastic, it is somewhat sticky but it should come off the bowl.

After 6 minutes, we are going to grease the container with a little oil so that it does not stick and we are going to let it rest for 90 minutes covered. You can put it in the oven without turning it on.

After an hour and a half, the dough had to double its size and now we are going to flour the table a little and we are going to give the dough a rectangular shape with the rolling pin, until it is approximately 50 cm long x 30 wide and a thickness of 1/2 cm to now continue with the filling:

Preparation of the filling of the Cinnamon Rolls
Easier can not be. For this we are going to use 5 tablespoons of cinnamon powder, 1 cup of brown sugar and 1/2 cup of melted butter.

First we will paint the dough with the butter covering the entire surface very well, then we will mix the cup of sugar with the cinnamon and we will spread it very well throughout the dough.

We will proceed to roll up trying to make the cylinder the same thickness … we should not tighten too much. 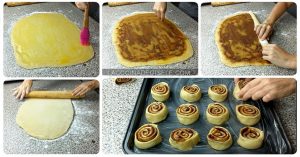 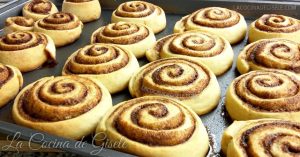 And if you like Cinnamon Rolls, don’t miss Los Golfeados! 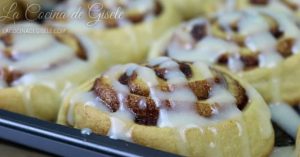 Do not stop preparing them that are sooo good! and they are super easy, they are fluffy and the Frosting or Glaze works perfectly for donuts or cakes. You will not be able to eat just one! 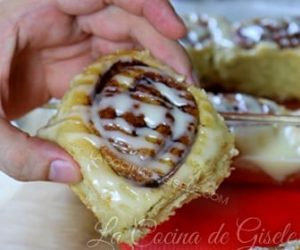