Who would have thought of taking advantage of every last vegetable? definitely to ancient civilizations. They did not throw anything away and they knew them all! Pumpkin seeds also known as squash, squash and in North America as pumpkin are the only seed that in itself is alkaline, which is very good to neutralize this crazy world of processed and acidic foods that are harmful to our body. So the next time you make a recipe with pumpkin, such as the delicious pumpkin cheesecake, or the rich cream of pumpkin, don’t throw the seeds away! Here I am going to explain how to take advantage of them. 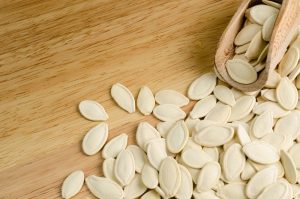 Pumpkin seeds even though it may not seem like they taste so good that they are perfect to eat alone or to add them to cereal bars, granola, bread, rice and whatever you can think of! When I was little, I would take sunflower seeds and eat them, never did you? well these, they are tastier, easy to prepare below I explain how 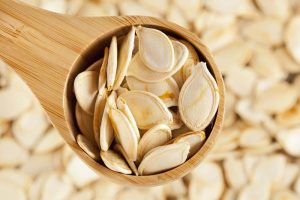 Easier impossible, we can do it in two ways:

• The first, place them in a pan with a little water and a pinch of salt and cook them until the water is consumed and then once this has happened, we continue cooking them a little until toast. I do not have much to make them bitter, in addition the less the cooking is better because they preserve all the essential natural oils that are the ones that provide all the benefits.

• The second way is: boiling them for a minute in water with a little salt, then we put them in the oven on a tray (they are not piled up but scattered) and we bake them at 170ºC for 10 minutes or less. Also instead of boiling them, you can soak them for 8 hours in water with a little salt and then bake them.
Pumpkin seed curiosities
Did you know….

Pumpkin seeds were discovered by archaeologists in caves in Mexico dating back to 7000 BC.

Did you see how many benefits? When you make a recipe again, do not throw them away .. and with the pumpkin we are going to prepare a quick pumpkin cake now, click on the photo or click here

Do not forget to share and leave me your comments or any questions below that I always answer!